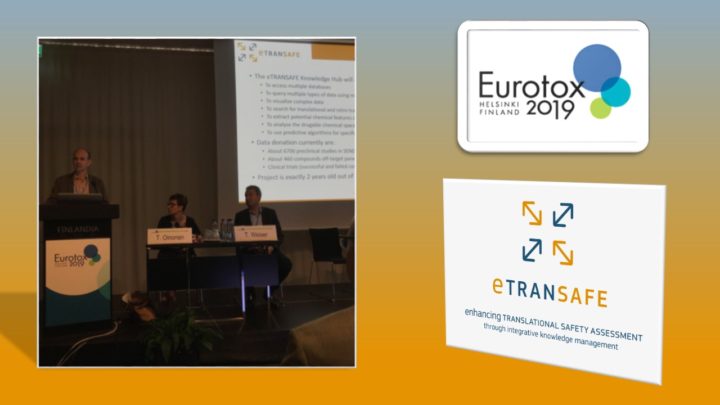 The annual meeting of the European Society of Toxicology (EUROTOX) held in Helsinki, Finland, from September 8th to 11th.

François Pognan, from Novartis, presented eTRANSAFE on behalf of the consortium at the annual meeting of the European Society of Toxicology (EUROTOX) in Helsinki. Under the title “Olson revisited: Translational Analysis of Safety Data (IMI eTRANSAFE)”, François illustrated the development of translational analysis from the days of the seminal publication of Olson and co-workers with some 120 compounds which were manually analyzed for their concordance between animal and human safety data over the possibility to use “big data” for automated translational analyses. eTRANSAFE has the potential to spearhead such approaches due to the large sets of data shared among the participating pharma partners but also the experience of the public and academic partners. The high level hurdles to achieve these goals were also highlighted. Francois drew the interesting parallel to space missions, which were once stopped due to high costs single use missiles and material and restarted only after the development of re-usable equipment. Similarly, the re-use of data in pharma has the potential to significantly lower the costs of drug development.