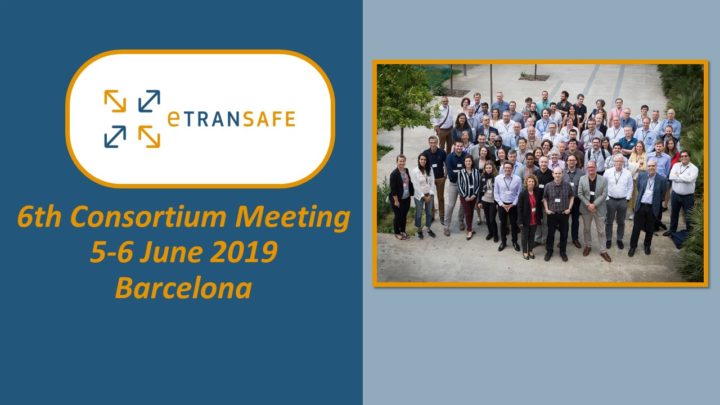 The 6th eTRANSAFE Consortium Meeting took place in Barcelona on the 5th and 6th June 2019.

The eTRANSAFE Consortium members gathered for two days to discuss the achievements and next steps of the project.

The first day of the meeting was structured in workshops around specific topics of interest. A first workshop around DILI models took place, in which an overview of the best DILI models produced by the task force was given, adding the feedback from EFPIA about the usefulness of models produced, as well as suggestions for the next modelling iteration.

The next workshop addressed the clinical data provision and the terminology mapping work. In parallel, a workshop on Data sharing experiences was organized, in which an update of the pre-clinical data donation was given, and the experiences on data extraction exercises and the legacy SEND mapping rule development were deeply discussed.

The last workshop focused on the identification of the opportunities for translational research analysing the possibilities and limitations to perform translational analysis using the currently available preclinical and clinical data in eTRANSAFE.

The second day started with a summary of the workshops held on the first day, followed by a discussion on the status and path forward of consortium technical developments. A successful demo on the first iteration of the system was performed.

The meeting ended with the vision from the eTRANSAFE Scientific Advisory Board members: Hennicke Kamp, Jean-Marc Vidal, José Vicente Castell and the recently appointed member Stéphane Dhalluin. Their contributions were valuable for the progress of the project, also to properly prepare the forthcoming IMI mid-term review planned for Q1 2020.